If Cookies are disabled, many important features of this site will not work.
Home » Finding Your Perfect Plants » Ferns » Cinnamon Fern

In stock.
Also available as:
See photographs comparing average sizes of some bare roots and potted plants
Osmunda cinnamomea, commonly called Cinnamon Fern, is a perennial nicknamed for the cinnamon-shaded fertile fronds that emerge from her center in spring.

First, though, edible fiddleheads surface from the center of a symmetric clump and stretch out into large, erect, pinnate-compounded, lemony-green sterile fronds stretching 2-4 feet long. In autumn, these fade to yellow then turn a topaz-brown before dying back in winter. Then, the fertile fronds emerge from the fern's center standing above the vase-like cluster of sterile fronds. At first green, they soon turn the spicy cinnamon shade for which she is famous, resulting in wonderful explosions of color.

Fertile fronds are covered with abundant masses of brownish sporangia that die back after shedding their spores in late summer. All of this ultimately results in wonderful texture and visual interest amidst any garden.

Cinnamon ferns yield delightful beauty as borders, or because they actually require moist soil, as edgings for ponds and streams. Grown in mass, their rusty-hued fronds create a feeling of flames in springtime, and as an accent, a clump of Cinnamon fern adds a lush, tropical feeling, particularly in shaded areas.

Winter dormant, these ferns have a slow to moderate growth rate, are some of the few groundcovers that will grow under walnut trees and deter deer, attributes for which they are prized. Ultimately, the Cinnamon Fern is an extra hardy, highly versatile, moisture loving perennial that offers constant growth interest as well as shimmering shades of shifting colors.

Things to Note
This plant is available for 20% off when purchased with Japanese Painted Ferns (Athyrium niponicum 'Pictum'). 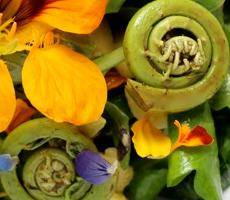 Edible fiddleheads are considered a delicacy and have been named Vermont's state vegetable. Try cooking these delightful vegetables by simply harvesting when about two inches from the ground and still tightly rolled. Treat them as you would asparagus or try them in quiches and soups. Delicious!


The latent buds of the Cinnamon Fern rival chestnuts in size and flavor!

Fronds can be killed by fire, but they re-sprout from rhizomes. Because of this, Cinnamon Ferns have good fire tolerance, often showing vigorous rhizome growth after the fact.

Gardener Tips
If you have a water feature, you will want to strongly consider this fern as one of its most stunning applications is planted by a pond where its reflection, in vivid green, is breathtaking.

Please read about bare root plants (especially the paragraph about bare root grasses) so you know what to expect.
See other plants that go well with this plant.
Specifications

Precise delivery - another benefit from shopping with us is that you know how many days delivery will take and can control exactly when your order will be shipped.

Shipping information that applies to all plants:
- Transit Time For Your Shipment (at most 3 days)
- When We Ship
- You May Specify Your Shipping Date
- Lookup Shipping Date and Tracking Information
- Special Delivery Instructions
- No Shipments To: AK, AZ, CA, HI, NV, OR, WA or internationally
- Changing Your Shipping Date
- Accepting Delivery
- Unpacking Your Order
- Returns

Performs best in well-drained (but moist) soil with added organic compost or peat moss. Best not to allow soil to dry out. Over winter, it is best to leave the dead fronds as crown protection.Ferns have delicate foliage that often suffers during shipment and transplanting. Cut off any foliage that is broken, bent, brown or yellow - the plants will quickly recuperate with fresh growth. Bare root ferns are particularly prone to foliage loss, it is not uncommon to have to cut them off at ground level when transplanting. As long as the roots are firm they will recover, showing new growth within weeks during warm months.
General information that applies to all plants:
- Ground preparation, fertilization, pH
- Planting instructions
- Explanation and description of bare roots
- How to plant bare root plants
- If you cannot plant bare roots right away